Macross roleplaying for the serious otaku.

This board is for the discussion of Anime, Macross or the Macross RPG Community in general. All discussions on this board are out of character. Please remember that the MRC has a very strict Non-Flaming, Non-Advertising, and Non-Spamming policy.

I was 10 and living in Portugal. There was only 1 English language station. I watched Robotech for the first time. When I got back to the States, I bought the first three Robotech books I ever owned from the book fair, books 8-10.

For me, over in the UK it was pure luck I even worked it all out. I rented a movie called 'Robotech The Movie' from the local store and loved it. A dude with his transforming bike and a AI signer, glorious stuff. As far as I was concerned it was a one off and done.

A few months/years later I was in one of those cheap ass stores and in a bargain bin of VHS tapes saw this gem: 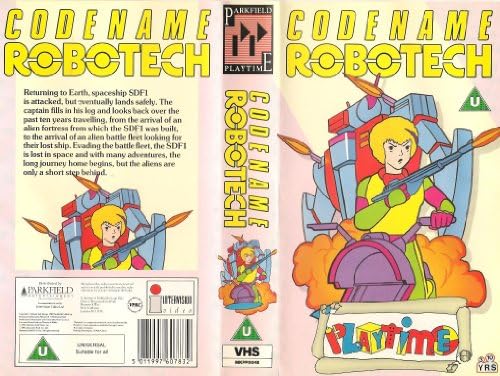 I think it was on pure luck alone I saw the name and was like "they cant be the same thing?" turned out it was a clip show of the first half of the Macross saga and I loved it.

After that came Macross Plus. The rest is history.
Top

Macross II was the next thing I saw. Then Plus.

Oh yea, that. I blocked that out.
Top

It was what it was. I will always be grateful because the Macross II game by Palladium is what led me to finding the MRC.

I caught the premiere of Robotech in 1985. So, I saw it on its original run, beginning to end.

That was because of my mother. She was a big anime fan. She used to pick me up half an hour early from preschool every day (for the non-USA people, that is like a school-daycare hybrid for 4 and 5 year olds). Starblazers (the Space Battleship Yamato dub) came on at the same time that preschool let out and she was not going to miss it. Anyway, the television lineup went something like Starblazers, Transformers, Robotech, and then Voltron. I starting watching Robotech because it was in the middle of my mother's anime block.


After that, I saw Clash Of The Bionoids, which was the first dub of Do You Remember Love and was also pretty bad because, like, a 1/5 of the movie had been cut from the Japanese version. It really confused me because everybody's names were wrong except for Minmei. I was, like, seven or eight. I didn't know about the whole import thing. Honestly, I probably did not even know that Japan existed at the time.
Top

When I got back to Hawaii from Portugal, my day was...

Saturday was Thundercats, Silverhawks, Voltron, and a few others that escape my memory

Users browsing this forum: No registered users and 6 guests